The thing about Little Prince is that he spends much of his time, happily exploring his own little world.  He pays little attention to everyone around him.  But he LOVES certain musical shows.  He gets all excited and loves to listen to them. Well today, Prince Charming sat next to him and sang the song from one of the songs along with the show.  Little Prince looked at the show, looked at Prince Charming and looked at the show again and started to dance and laugh.  He got so excited he squeezed his little eyes shut and clenched his hands and started to laugh so hard as he rocked himself back and forth really fast.  It was so sweet.  It was like he had seen his father join him in his own little world and he was overwhelmingly excited to see him there.  I had tears in my eyes when I saw such a joyful connection between father and son.

I think that is how we are going to have to deal with this possible autism diagnosis.  We learn to join him in his world and then teach him how to join us in ours.  And I think music may play a part in our learning to reach him in his world. 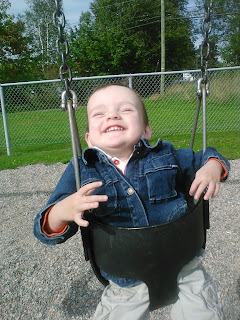