Little Prince had a bad last night, but somehow it was okay.  He kept me up half the night but as long as we were together, he was fine.   And a kind of incredible thing happened.  I was sitting on his bed trying help him settle and he walked away from me, walked to the door, touched the knob, and walked back to me and held his arms up!  He was asking me to take him downstairs to the living room!  So I picked him up and took him downstairs to the living room and we watched The Wiggles together.  Later in the night he did the same thing but I wanted him to stay upstairs to settle so when he touched the door I looked at him and said, "No.  We are not going downstairs but mommy will stay with you for a while, come on over here and sit with me."  We repeated this a couple of times and then he came over to sit with me!  It was almost like a conversation!!  In our own way we communicated.  So we snuggled, I tickled him, I sang to him and I stayed until he was content.  When I was tickling him, he kicked me in the jaw and gave me a horrible headache, but he also giggled the word, "momma" when I was tickling.  I was up half the night,  I have a terrible headache, but I wouldn't change it.  My boy and I snuggled, we giggled, we COMMUNICATED and he said MOMMA!  It was good.

Little Prince sitting between my feet watching The Wiggles. 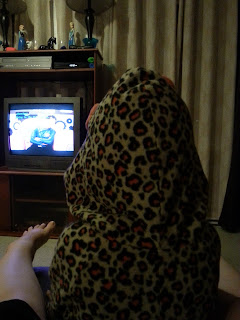 Little Prince up late with me 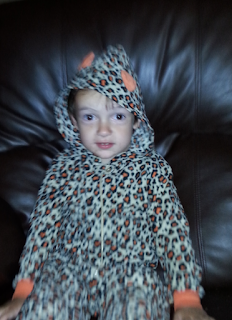