Yesterday, he stayed at school, but he slept all afternoon.  Today, he woke up asking to go to school.  So, I decided to send him in.

My boy finally seems to be feeling better!! He had a good day in school for the first time to since he got sick. He ate most of his lunch in school, and there's some extra snacks in his bag that it looks like he was eating. He came home and drank juice, he had a snack and then later he ate three sandwiches. He is happy, he is playing, and he seems healthy.

I also went out and bought some high calorie Boost for him. I want to boost his weight up a little bit to be honest. He's lost some weight since he's been sick. And, he was already way too small. The doctor said he was underweight before he even got sick. He didn't need to lose this weight. So I am a happy mommy with a happy boy. What more can I ask for it. 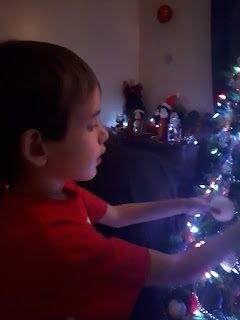 I give you credit for staying positive! Keep pushing momma!!